They call it “The Sigh.” 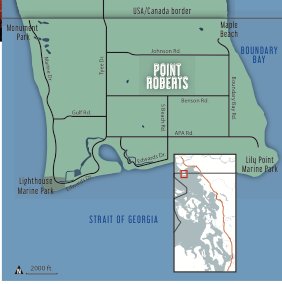 The sigh involuntarily escapes both visitors and locals after they drive through U.S. customs, turn onto Tyee Drive and see the long, expansive view of towering evergreens – the sea swelling in the distance. Not everyone feels it but if you do, you’re hooked. You’ll be back, again and again. After driving through loads of traffic, braking for stoplight after stoplight, passing store after store, finally, you’re looking at heaven.

That’s when “The Sigh” will involuntarily escape you. Go ahead and let it out. We’ll wait.

Point Roberts is an island of serenity compared to the bustle of the Vancouver metropolitan area. The calm is palpable as soon as visitors cross the border. The streets are narrow and lined with forests and fields, with views of the sea peeking through. Drivers give a wide berth to the horses, cyclists and walkers with whom they share the road.

The pandemic was tough on the Point – only essential travel was allowed into Canada or to transit to the rest of the States. The re-opening of the border was an issue of deep concern to residents and local businesses. Now, “the Point” is welcoming tourists back with open arms.

The Point maintains a small-town atmosphere. Neighbors chat in the post office or the supermarket on Tyee Drive. The Gulf Road community center is a gathering place for local groups, hosting everything from seniors’ association lunches to the History Center. The Point Roberts Library sits just next door.

At the end of Gulf Road, there are two restaurants with panoramic views of Georgia Strait, the Gulf Islands and Vancouver Island. On exceptionally clear days, one can see the whitecapped mountains of the Olympic Peninsula.

The Fourth of July in Point Roberts is a hometown USA extravaganza featuring a parade, pancake breakfast, barbecue and fireworks.

Point Roberts life centers around the outdoors. With parks at each corner of the peninsula, a marina and a golf course, this 5-square-mile community is bursting with opportunities for outdoor activity.

Lily Point Marine Park has miles of hiking trails, snaking along the uplands and down to the bluff-ringed beach with views of the San Juan and Gulf islands, Mount Baker, as well as sightings of resident eagles and great blue herons. In early summer, eagles gather by the hundreds on the sand flats to gorge on small fish trapped in tidal pools. Signage in the park educates visitors on the rich history of the area.

The northeast corner of the Point is home to Maple Beach. During summer low tides, Maple Beach offers acres of tide flats where families set up camp and spend the day splashing in the warm water, clamming, crabbing, beachcombing or zipping along on skimboards. On an incoming tide on a hot summer day, the water temperature can reach the mid-80s.

In the southwest corner, Lighthouse Marine Park offers camping and a boat launch. When the salmon are running, it’s a popular fishing spot for more than just people; harbor seals and the local pod of southern resident Orcas also stop to fill their bellies. Whale watchers tend to have better chances of spotting an Orca in mid-afternoon but the local park ranger will be happy to tell you when they tend to visit recently.

Monument Park in the northwest corner houses a trail down to the beach. While the trail is steep, the beach is worth the hike. The end of the hike offers a place on the beach that is quiet and secluded, with acres of tide flats at low tide. These tide flats are a popular hunting ground for great blue heron, making this beach the perfect spot to observe nature on a sunny afternoon.

The sigh Point Roberts inspires in visitors is a gift that keeps on giving – inhale that luxuriously fresh sea air, and let the sigh take over again and again.